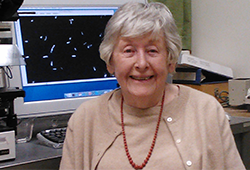 The National Academy of Sciences (NAS) has received a $1.9 million unrestricted bequest from the estate of Mary Jane Osborn (NAS '78). This generous gift will be directed to the NAS unrestricted endowment and will provide critical ongoing support for a number of NAS activites, programs, and initiatives. Dr. Osborn was elected to the NAS in 1978 and served on the NAS Council from 1990 to 1993, before her death in 2019 at the age of 91.

NAS President Marcia McNutt said, "The ongoing COVID-19 pandemic and the pressure it has placed on the Academy's unrestricted resources to meet the need for timely advice tailored to the crisis has underscored the importance of a healthy endowment to meet all of our ongoing priorities. Unrestricted gifts like Dr. Osborn's ensure that we continue to advance the NAS mission broadly while responding to immediate crises facing our nation and world."

Mary Jane Osborn was an American biochemist and microbiologist known for discovering the mechanism of action of the anti-cancer drug methotrexate. Her research career began in the late 1950s, a time when women were underrepresented in all fields of science, and when many major university biomedical research departments had no tenured female faculty. Her research earned her international recognition, leading to her election to the American Academy of Arts and Sciences in 1977 and to the National Academy of Sciences in 1978.

"We are truly honored that Dr. Osborn provided such a wonderful gift to the NAS in her estate," said McNutt. "She was a leader in her field, and her legacy as a trailblazer for women scientists will continue through her generosity."